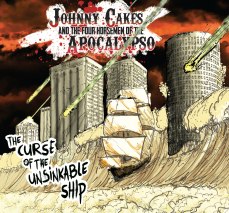 An interview with Johnny Cakes and the Four Horsemen of the Apocalypso’s Michael Middlebrooks. Originally posted at the Tampa Concert Tours Examiner.com page.

2013 is already a big year for Tampa’s Johnny Cakes and the Four Horsemen of the Apocalypso, enjoying the successful release of their new album “The Curse of the Unsinkable Ship,”and earning a spot at the Florida Music Festival.

Now in their seventh year as a band, the initial idea behind Johnny Cakes came to fruition around 2004 in Jacksonville Beach, Fla, but really lifted off when lead singer Michael Middlebrooks moved to Tampa and met guitarist Mikey Imperiale. The pair connected with a few players through Craigslist, and played their first official gig at the Uptown Bar (now Fubar) in 2006.

The nine-piece band features a wide array of musical madness, nearly spilling off stages at smaller-sized venues. The group features an eclectic mix of horns, vocals, and steel pans mixed with engaging guitar, bass, and drum licks. They have coined their unique genre of music “Gutter Calypso,” and their manager is a life-sized plastic blow-up penguin named “Skippy.”

“He’s not a very good manager, and he’s not very good with money, but the ladies love him,” said Middlebrooks.

The group released their newest disc in January at Ybor City’s Crowbar. The impending departure of former drummer Nick Souder motivated the band to create the record.

“The album is inspired by the band itself. It has always seemed that no matter what we would do with the band, through our best attempts at bringing it down, the band keeps together and continues to see success,” said Middlebrooks.

The new album has an uplifting, lighthearted, make-you-wanna-dance vibe. The band gets the tropically infused party started right away with “Johnny Cakes Jump Up.” The band diversifies lyrically, with topics covering a broad range of subject matter. “Responsible Adult” documents the struggles of conforming to societal norms of adulthood, each chorus ending with “Weiner!” A trip through Starke, Fla., and a truck packed with beehives became the back-story of “Bee Tuck” a topic still heavily discussed between band members. “Dream Vacation” chronicles a day-dreamy yet creepy tale of a man’s infatuation with a girl, and his plans to take her on adventures around the world, as documented, supposedly, on her voicemail.

Middlebrooks’ awkward, real-life encounter with former Florida governor Charlie Crist is the basis behind the song “Charlie Suntan vs. the Hurricane.” Crist, who was touring Florida during his run for senate, was touting the belief that a hurricane had not hit the state since 2005 due to a note he left for God on Jerusalem’s Wailing Wall.

“I asked him if he really believed that and he got pretty irate,” said Middlebrooks. “While I was talking to him, one of his aides put a campaign sticker on me, which Crist ripped off when it came up in conversation that I’m an atheist.”

The band uses social media to get the message out as much as possible, but Middlebrooks is a firm believer in promoting in person. For young musicians just getting their start in the greater Tampa Bay music scene and beyond, he recommends hitting the pavement just as much as hitting the “share” button on Facebook.

“Go to shows you aren’t playing, meet people there, meet people in other bands. Have fun; be friendly and supportive of others. It’s all about building a bigger, better music scene,” said Middlebrooks.

Catch Johnny Cakes and the Four Horsemen of the Apocalypso Friday, April 18 during the Florida Music Festival at The Social in Orlando, Fla.

*If you’re a musician or band currently playing in or touring through the greater Tampa/St. Pete/Clearwater area, I’d like to feature you here.  Please contact me by emailing Brennerevan@gmail.com*

I'm a published journalist with a Bachelor's degree in Mass Communications, specialization in news editing, from the University of South Florida. I've published journalistic works in the University of South Florida Oracle, AOL Patch.com, the Tampa Tribune and Creative Loafing. I've also had the pleasure of publishing online with the Dunedin Free Press, TBO.com and Examiner.com. As a photographer, I’ve enjoyed the publication of my work in the Link magazine, as well as an honorable mention in their annual photo contest. My photographic work has appeared in juried art shows held by the city of Clearwater, Fla., as well as in Artbook Tampa Bay. I’ve spent 8 years in social media as social media coordinator for Variety Workshop, Photography Alive, Brenner Media Services and pitchman Anthony Sullivan. As a sales professional at Office Depot and Best Buy, I received extensive training in retail management, operations, sales and customer service. My current goals include striving to reach success in all my currently involved fields, and making the most of every second. View all posts by Evan Brenner

This site uses Akismet to reduce spam. Learn how your comment data is processed.