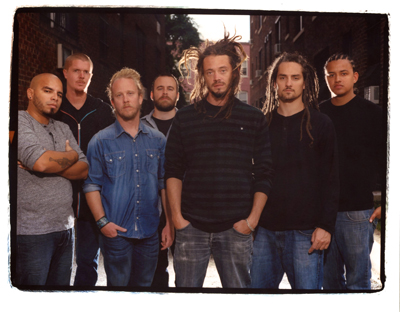 Fresh off a their first-ever set at Wanee fest, SOJA rolls into Jannus Live Tuesday night, pumped to play the venue for the first time in almost a year-and-a-half.

“It’s one of the coolest venues in the country, and St. Pete is just a great place in general” said lead singer and guitarist Jacob Hemphill.

SOJA is currently touring as the opening act for reggae legends Steel Pulse, a band that got their start in the 1975 England punk scene, opening for bands like The Clash, The Police and XTC.

The band’s most recent release, Strength To Survive, is an album that taps on Bob Marley for influence.

He was influenced by music, even at a young age, due to his father’s involvement in a church orchestra and choir and acquired his first instrument as a teen.

As a kid, he traveled around the world with his father, who was a resident representative for the International Monetary Fund.  He spent his formative years growing up in Africa, in countries like Nairobi and Nigeria.

As a reggae artist, Hemphill said he thinks that the genre as a whole understands unity better than other styles of music.

“I think reggae gets it better than most,” said Hemphill.  “Reggae’s talking about how the human race is really one thing.”

And this summer, the band enjoys their first set at festivals like Wakarusa and Bonnaroo , where they’ll play alongside the Red Hot Chili Peppers, Radiohead and Phish.

“This is actually the first summer we’ve been playing these larger festivals,” said Hemphill.

And what can you expect to see if you’ve never taken in a live SOJA performance?

“Everyone loses it for an hour, we leave it all on the stage,” said Hemphill. “It’s super-high energy.”

Hemphill credits the internet, file sharing and social media with spreading the message of SOJA faster than perhaps traditional methods of publicity would have in the days before the Web.

“Without the internet, we wouldn’t be anywhere,” said Hemphill.

Hemphill acknowledged that the band is currently working on new material when not on tour, and encouraged fans to keep an ear to the ground for new music in the coming months.

“When you’re home, you have to focus on music,” he said.emphill acknowledged that the band is currently working on new material when not on tour, and encouraged fans to keep an ear to the ground for new music in the coming months.

I'm a published journalist with a Bachelor's degree in Mass Communications, specialization in news editing, from the University of South Florida. I've published journalistic works in the University of South Florida Oracle, AOL Patch.com, the Tampa Tribune and Creative Loafing. I've also had the pleasure of publishing online with the Dunedin Free Press, TBO.com and Examiner.com. As a photographer, I’ve enjoyed the publication of my work in the Link magazine, as well as an honorable mention in their annual photo contest. My photographic work has appeared in juried art shows held by the city of Clearwater, Fla., as well as in Artbook Tampa Bay. I’ve spent 8 years in social media as social media coordinator for Variety Workshop, Photography Alive, Brenner Media Services and pitchman Anthony Sullivan. As a sales professional at Office Depot and Best Buy, I received extensive training in retail management, operations, sales and customer service. My current goals include striving to reach success in all my currently involved fields, and making the most of every second. View all posts by Evan Brenner

This site uses Akismet to reduce spam. Learn how your comment data is processed.